Like most sports, rowing has its own distinct language and vocabulary. If you’re feeling a little lost in the reeds, here’s a simple rowing glossary to help you out!

Air Stroke: A common rowing error wherein the oar’s blade is not completely in the water, typically resulting in a loss of power and a lot of splashing.

Bow: Essentially, the “front” of the boat, or the part that moves forwards through the water.

Catch: The moment when the blade enters the water, and initiating the drive of each stroke.

Coxswain: Since rowers sit with their backs to the direction of travel, it is necessary for one person to face forwards, towards the other rowers and the bow. This person, called the coxswain, is responsible for steering the boat and for coordinating the power and rhythm of the rowers.

Digging: A common rowing error wherein the oar sinks deeper into the water than it should, slowing the boat down as a result.

Ergometer (Erg): A indoor rowing machine, so-called because they measure units of energy called “ergs.” Erg is short for Ergon, the Greek word for “work” or “task.”

Hull: The body of the boat or shell.

Keel: The center line in the middle of the hull.

Launch: A motorboat commonly used by coaches and referees, to keep pace with the rowers.

Lightweight: In order to compete in “lightweight” events, a rower’s weight must fall beneath a certain threshold. This is typically 155 lbs. for men and 130 lbs. for women. A “heavyweight” or “openweight” rower has no weight restrictions.

Openweight: While male rowers can be classified as either “lightweight” or “heavyweight,” non-lightweight female rowers are referred to as “openweight!” However, some competitions have begun using the openweight category for both genders.

Port:The left side of the boat, when the boat is facing forward/in the direction it will move.

Power 10: A call by the coxswain for the crew to execute 10 of their best, most powerful strokes, usually in an attempt to pull ahead of a competitor.

Sculling:One of the two disciplines of rowing (the other is “sweeping.”) Each rower operates two oars, one in each hand. Sculling is generally considered more technically complex than sweeping.

Shell: Another name for “boat.” The two terms can be used interchangeably; neither is right or wrong.

Starboard: The right side of the boat, when the boat is facing forward, in the direction it will move.

Stern: The “back” of the boat, towards which the rowers are facing.

Sweeping: One of the two disciplines of rowing (the other is “sculling”.) Each uses one oar and is paired with a rower on the opposite side. Sweep boats are called pairs (2 rowers), fours (4 rowers), and eights (8 rowers). All three classes can include a coxswain, though pairs and fours do not require them.

Tracks: The rails which rowers’ seats roll on, often referred to as “slides.”

Weigh Enough: A common coxswain call that instructs rowers to stop whatever they are doing immediately. In the U.S., the spelling “way enough” has also emerged. 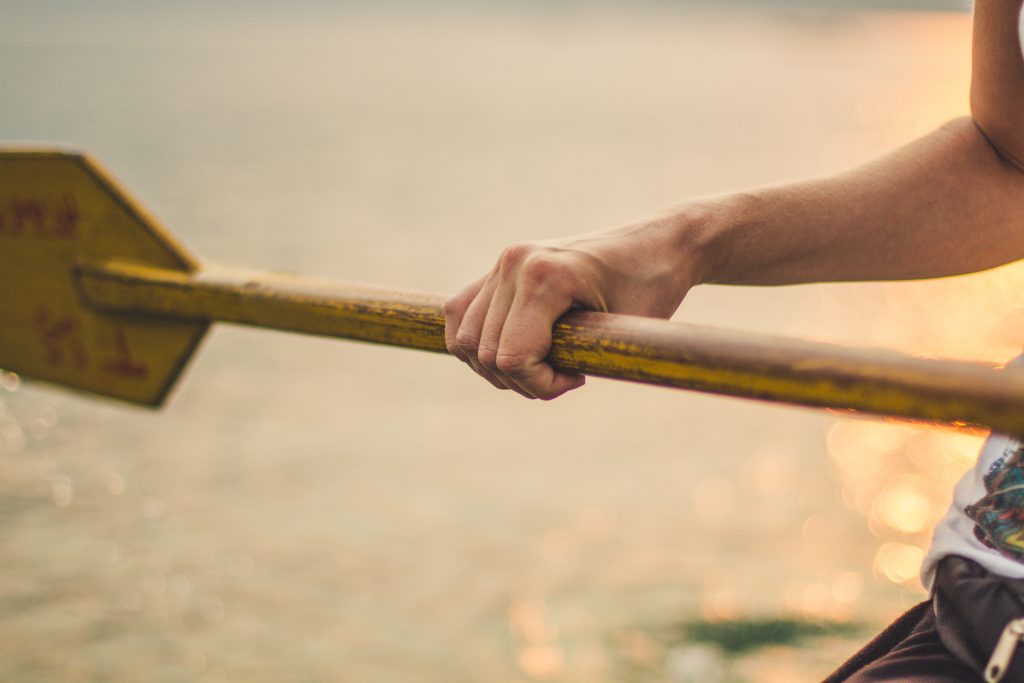 Curious about the benefits of rowing? Here are some reasons why you might consider giving it a go!

It works the whole body

Rowing may look like an upper-body sport, but don’t be fooled: although it’s true that upper body strength is crucial, the real power in rowing comes from the legs. That’s one reason why rowers have been called the world’s most physically fit athletes: rowing is one of the few athletic activities that involves all of the body’s major muscle groups. According to the American Fitness Professionals Association (AFPA), the rowing stroke is comprised of 65 to 75 percent leg work and 25 to 35 percent upper body work.

Many low-impact activities, like yoga, help hone balance and strength, but don’t offer so much on the cardio side of things. Rowing is one of the very few sports that can get your heart pounding without placing a lot of strain on your knees and ankles. This is why rowing is sometimes recommended as an exercise option for people with early stages of osteoarthritis, or those seeking to actively recover from an injury. The same cannot be said for high-impact exercises, such as running or plyometrics (“jump training”).

It can have mental health benefits

The smooth, gliding motion created by the rowing stroke—either on a real boat or on a rowing machine—can be very meditative for some people. This is mainly due to the four phases of the row stroke: the catch, drive, finish, and recovery. Repeating these motions over and over can allow the mind to go on autopilot, creating a calming effect that is as beneficial for the mind as it is for the body! In addition, like all demanding workouts, rowing releases feel-good hormones that can reduce stress even further.

It can help improve posture

If you’re like most Americans, you probably spend large amounts of time hunched over a screen—a behavior that can negatively impact your back muscles. When certain back muscles are unused, it can cause you to slouch or have bad posture all the time, not just when you’re at the desk. Certain sports, like cycling, can also cause people to develop posture abnormalities, like slumped shoulders and neck pain. The good news is that rowing with proper technique can help strengthen your back muscles, helping improve your posture and flexibility. This is because, instead of hunching your back, the rowing stroke requires you to use your legs and core, and essentially engages literally every single muscle in your back. As you extend and flexing your back during a rowing exercise, you’re stretching and strengthening muscles that are generally weak and unused.

It’s great for all ages and fitness levels—really

Reading through this article, you might gain the impression that rowing is an intense, grueling workout—and it can be. However, it can also be a great entry-level sport for those with very little fitness experience at all. A rowing machine’s resistance can be adjusted to suit your needs, and the low-impact nature of rowing means that it is a good sport for elderly or disabled persons. No matter how old you are, what you weigh, or what your fitness level is, rowing can provide a challenging workhouse that’s still in your wheelhouse—so you feel confident and successful, not destroyed, after your workout!

If you are looking a rowing club in Inverness FL, we hope you will consider joining us and giving rowing a try. It has certainly brought our members a great deal of physical and mental fulfillment!

Hello and welcome to a new season of ROCCS rowing!

As you may already know, in order to fund the travel, accommodations, and equipment we need for our rowers, ROCCS holds one major fundraiser per year, our Casino Night. This year’s Casino Night will be held on Saturday, October 16th, 2021, from 6 p.m. to 11:p.m., at the Inverness Depot Pavilion.

We hope that you (and any of your interested friends or family members) will come out and join us for a fun night of casino games, craft brews, and great food. We’ll also be hosting prize raffles, a silent auction, and awesome live music courtesy of Moccasin Slough!

If you have any questions, please contact us here. We thank you in advance for supporting ROCCS, a.k.a the Rowing Organization of Citrus County Students, and for helping us bring the sport of rowing to adults and kids in our community!